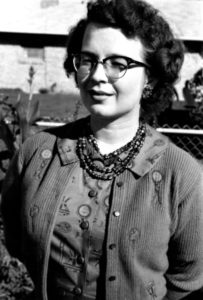 To say Gladys Veidemanis’ 26 years as a teacher in the Oshkosh school system made an impact is a considerable understatement. Mrs. V, as she was fondly known to her students, is legendary among those who were lucky enough to experience her classes. She pushed students to excel; to think and to write well, utilizing proper grammar while illustrating an understanding and comprehension of the subject. She wouldn’t accept anything less than a student’s best effort and had an uncanny knack for connecting with each student in a personal way, uncovering their unique gifts. She wrote dozens of letters of recommendation for college admissions every year on her students’ behalf. Her students would all agree, she left an indelible mark on them.

In one instance, that mark was profound for a former student. Peter Muehrer graduated in 1978 from Oshkosh North High School, and went on to receive his Bachelor of Art Degree in Psychology from Yale University. It was with Mrs. V’s encouragement that he applied to Yale. He continued his studies receiving his master’s degree and a Doctorate in Clinical and Community Psychology from the University of Maryland, College Park. Dr. Muehrer retired in 2016 after serving nearly 30 years as Chief, Health and Behavior Research Branch of the National Institute of Mental Health.

To illustrate the power of education, and the incredible impact one teacher can have, Dr. Muehrer established the Oshkosh North High School Class of 1978 Gladys Veidemanis Scholarship Fund in 2014. Along with the help of other 1978 Oshkosh North classmates, the fund has grown to $127,000 and has gifted $12,500 in scholarships to graduating high school seniors. The fund came as a complete surprise to Mrs. V, having learned of it after it had already been established. Mrs. V noted that as much as she left a mark on her students’ lives, so too did they on hers. She states, “I feel privileged and blessed.” So do we Mrs. V. So do we.